Join Pat Sampson, Jarrod Alberich and Jason Alberich as they take a look at the first issue of G.I. Joe A Real American Hero.

Later on in the podcast they have some fun going over some history notes on major news, popular films and music from January and June 1982. 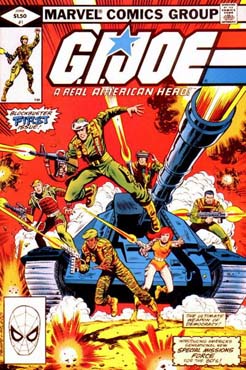 Credits for this issue comes from: Mike's Amazing World of Comics

Check out Jarrod's website The Yard Sale Artist at: http://www.theyardsaleartist.com/

Let us know what you think!
Leave a comment, send in a recipe or an email to: contact@longboxcrusade.com

Thank you for listening and we hope you have enjoyed this episode of the Longbox Crusade.
Please join us for the next episode as we continue on the crusade to "Read Them All!"

All songs, sound clips, and characters discussed are copyright of their respective copyright holders, and no infringement is intended. We make no money on this podcast, it is for entertainment purpose only.
Posted by Pat Sampson at 11:42 PM